New fencers get their first taste of competition 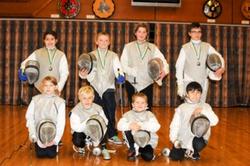 Shetland's newest fencers have been training once a week since summer, after first trying out the sport through Phil's Active Schools taster sessions.

Their first chance to compete 'on the box' came just before Christmas, as they finished off the first term with a mini-tournament. Every one of the nine taking part showed a good command of their new skills, and adapted quickly to using the electric scoring kit, piste markings and new fight formats. Particular highlights picked out afterwards by the coaches included Charlie's indirect ripostes, Tegan's mid-fight change of tactics in her semi-final, Izzie's footwork and Ethan's excellent technique.

After a seeding round, the direct elimination fights took James and Ella to the final, with James winning gold and Ella silver. Bronze medals were awarded to semi-finalists Dougie and Tegan. 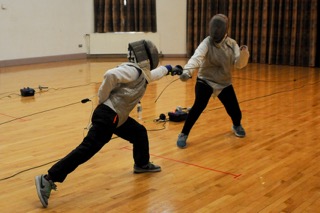